The cornerstone of the automated pipeline is an annotated 3-D reference space. For this purpose, a next generation of the common coordinate framework (CCF v3) is being created based on an average population of 1675 specimens. See the Allen Mouse Common Coordinate Framework whitepaper for detailed construction information. In this current release, the framework consists of 178 newly drawn structures spanning approximately half the brain. To support whole brain quantification, structures which have not yet been drawn are extracted and merged from the version 2 framework based on the Allen Reference Atlas. The interface between old and new structures were manually inspected and filled to create smooth transitions to create a complete brain map (~700 structures) for quantification. 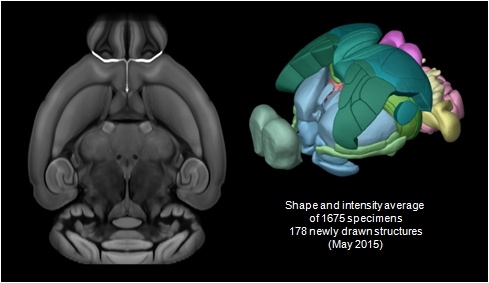 Figure: The next generation Allen Mouse Common Coordinate Framework is based on shape and intensity average of 1675 specimens from the Allen Mouse Brain Connectivity Atlas. At the time of the May 2015, 178 structures on have been delineated on the anatomical template.

Structures in the common coordinate framework are arranged in a hierarchical organization. Each structure has one parent and denotes a "part-of" relationship. Structures are assigned a color to visually emphasize their hierarchical positions in the brain.

3-D annotation volumes were updated in the May 2015 release to reflect the remapping to the new Allen Mouse Common Coordinate Framework (CCFv3). Annotation volumes from the October 2014 release (mapped to CCFv2) can be access through our data download server (see instructions).

Each data type is available in multiple voxel resolutions:

All volumetric data is compressed NRRD (Nearly Raw Raster Data) format. The raw numerical data is stored as a 1-D array raster as shown in the figure below.

Example Matlab code snippet to read in the 25µm template and annotation volumes:

Example Python code snippet to read in the 25µm template and annotation volumes:

The red, green, and blue channels have been aligned to the 25um adult mouse brain reference space volume.  These volumes have been stored in the API WellKnownFile table with type name "ImagesResampledTo25MicronARA".  To retrieve the download link for a specific data set, query for WellKnownFiles of the appropriate type with an "attachable_id" equal to the data set id:

Download this by attaching the value of the download-link field to the API web host name (http://api.brain-map.org/api/v2/well_known_file_download/269830017). The download file will be a .zip file containing three images stored in the raw meta image format:

All volumes have the same dimensions as the 25um adult mouse reference space volume.

To perform a Target Search, the user specifies a set of target structures. The service returns a rank list of experiments by signal volume in the target structures which are above a minimum threshold. The target structure specification can be further refined by hemisphere. The search results can also be filtered by a list of source structures and/or list of transgenic lines. 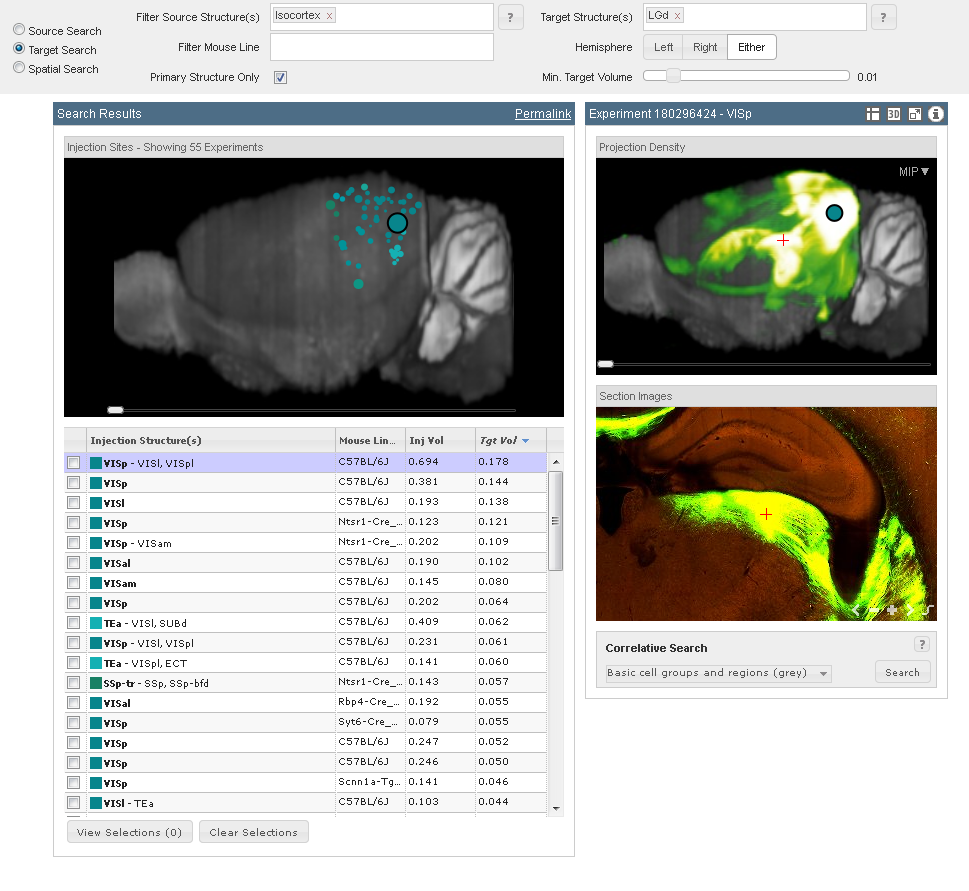 Figure: Screenshot of target search results in the web application for experiments with projection in target structure LGd (dorsal part of the lateral geniculate complex) and injection in the isocortex. The injection location of each experiment is shown as a sphere on the 3D injection map. 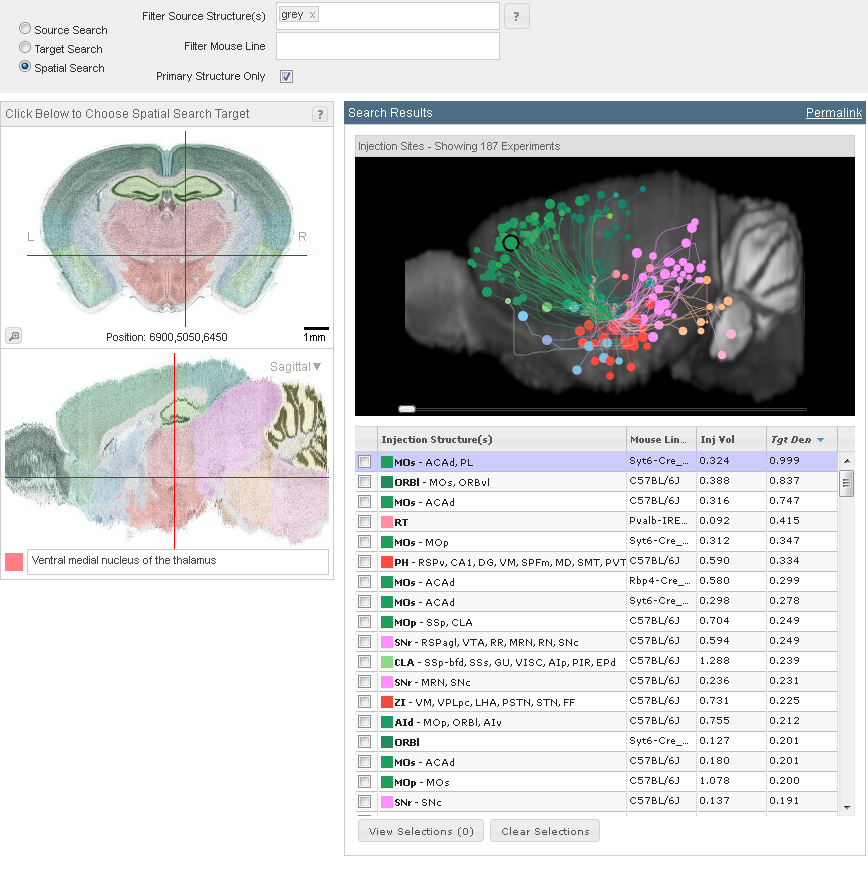 To perform an Injection Coordinate Search, a user specifies a seed location within the 3D reference space. The service returns a rank list of experiments by distance of its injection site to the specified seed location.

See the connected service page for definitions of service::mouse_connectivity_injection_coordinate parameters.

Example: Injection coordinate search for experiments with a seed location in VM (ventral medial nucleus of the thalamus)

See the connected service page for definitions of service::service::mouse_connectivity_correlation parameters. 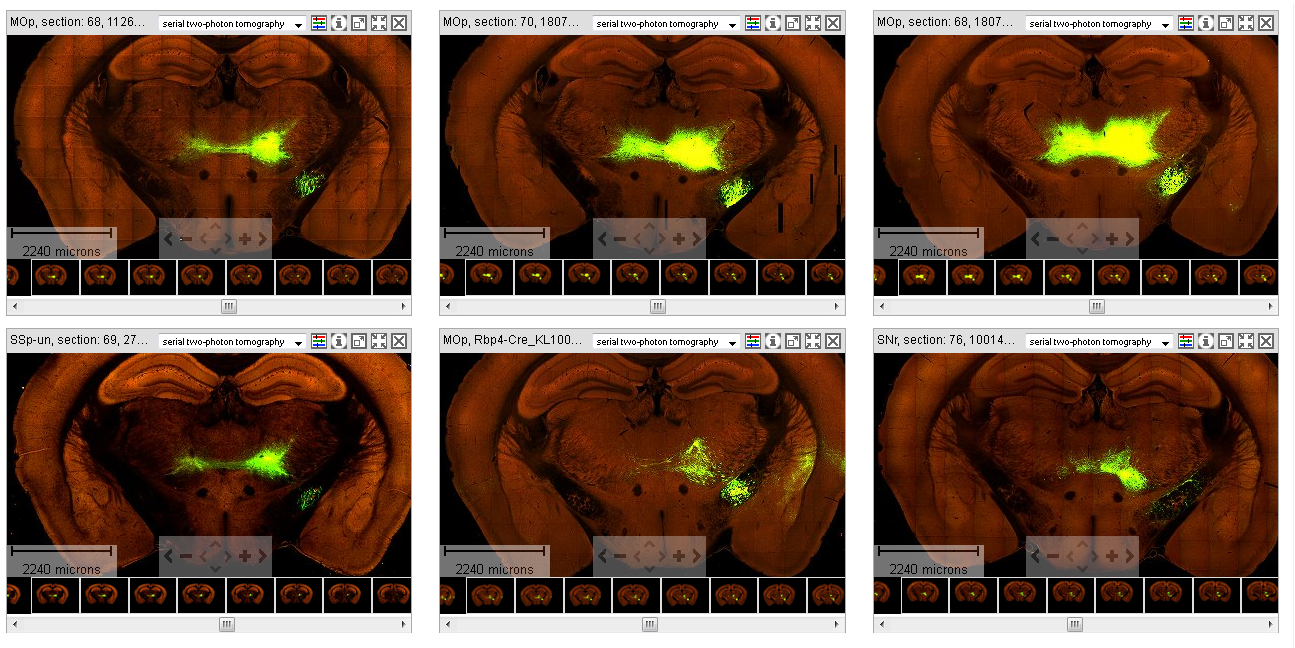 Figure: Screenshot of top returns of a correlation search for experiments with similar projection to a MOp injection experiment (top-left) within the thalamus