The inaugural release of the Allen Brain Observatory aims to elucidate visual coding: How are visual stimuli represented by neural activity in the mouse visual cortex in both single cells and populations? To answer this question two-photon calcium imaging was recorded from several areas of the visual cortex in four distinct transgenic mouse lines during exposure of five rich visual stimuli.

To produce standardized protocols to be able to record from the same cortical area over the extent of the experiment required coordination and hand-off between the many teams performing platform development, data collection and analysis. A basic workflow is outlined below.

Creating a window into the brain

Accurately measuring the activity in a specific visual area in a reproducible and standardized manner first requires a window into the brain - replacing a small section of the skull with a clear glass cover slip that allows visual access to a 5 mm diameter region of the brain. 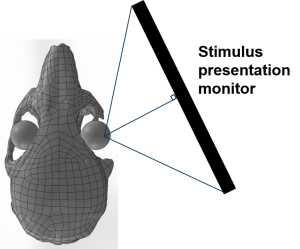 Being able to consistently locate a cortical region and even a specific cell requires that each system used to collect data maintains a consistent relationship between the mouse's eye and the visual stimulus being presented.