The backbone of the automated pipeline is an annotated 3-D reference space based on the same Specimen used for the coronal plates of the integrated reference atlas. A brain volume was reconstructed from the SectionImages using a combination of high frequency section-to-section histology registration with low-frequency histology to (ex-cranio) MRI registration. This first-stage reconstructed volume was then aligned with a sagittally sectioned Specimen. Once a straight mid-sagittal plane was achieved, a synthetic symmetric space was created by reflecting one hemisphere to the other side of the volume.

To avoid possible bias introduced by using a single specimen as a registration target, the Nissl-based 3-D reference volume was not directly used. Instead, a large number of brains were mapped in advanced and averaged to form the registration target. This averaged template may be updated periodically to include more brain specimens and is available for download.

3-D annotation volumes were updated in the June 2013 release to reflect changes in the atlas drawings and ontology. Also note that the volumes are now in a 32-bit format to accommodate large structure identifiers.

Example Matlab code snippet to read in the 25µm atlas and annotation volumes: 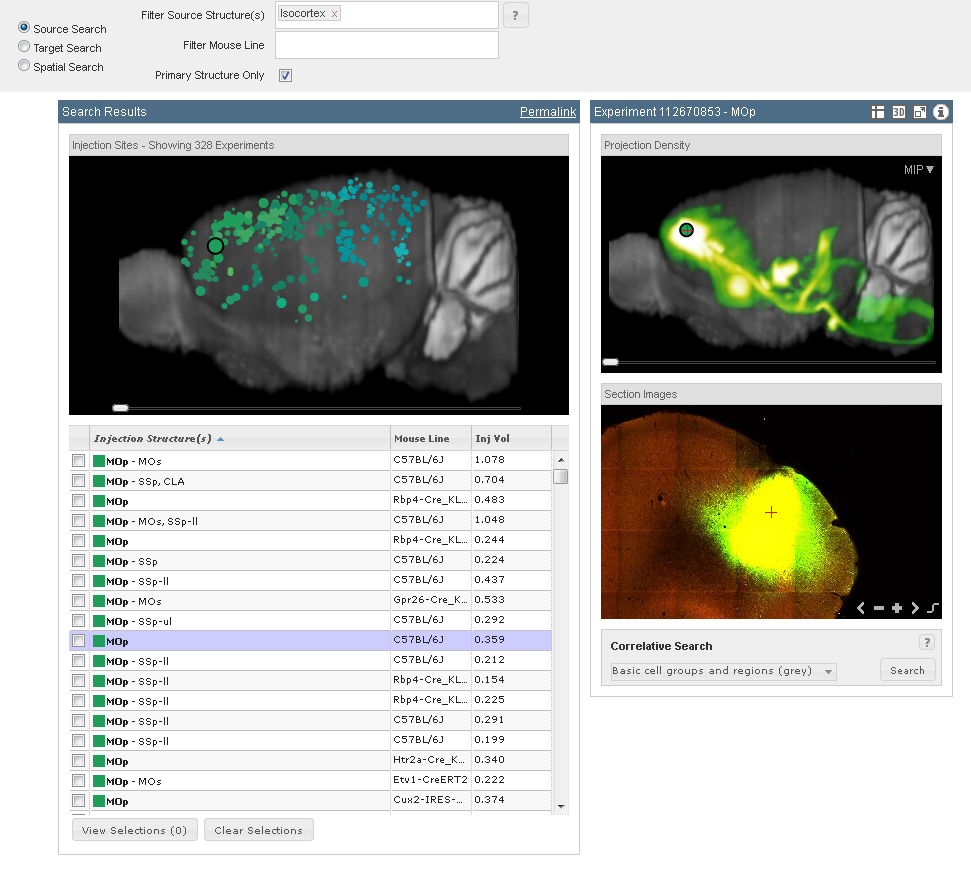 To perform a  Target Search, the user specifies a set of target structures. The service returns a rank list of experiments by signal volume in the target structures which are above a minimum threshold. The target structure specification can be further refined by hemisphere. The search results can also be filtered by a list of source structures and/or list of transgenic lines.

Figure: Screenshot of source search results in the web application for experiments with projection in target structure LGd (dorsal part of the lateral geniculate complex) and injection in the isocortex. The injection location of each experiment is shown as a sphere on the 3D injection map.

To perform a Spatial Search, a user selects a target location within the 3D reference space. The service returns a rank list of experiments by signal density in the target location and with density greater than 0.1. The search results can also be filtered by a list of source structures and/or list of transgenic lines.

Example: Spatial search for experiments with projection signal in a target location in VM (ventral medial nucleus of the thalamus) and injection in the isocortex

Figure: Screenshot of spatial search results in the web application for experiments with projection in target location within VM (ventral medial nucleus of the thalamus) and injection in the isocortex. Each line in the 3D map is the computationally generated path from the target location to injection of one experiment.

To perform an  Injection Coordinate Search, a user specifies a source location within the 3D reference space. The service returns a rank list of experiments by distance of its injection to the specified source location. The search results can also be filtered by a list of source structures and/or list of transgenic lines.

Example: Injection coordinate search for experiments with a source location in VM